Say that we agree to define collaboration as a group’s ability to coordinate effort to produce some work output.  I believe that the effectiveness of collaboration improves in direct proportion to:

Together let’s call these the claims of Collaborative Power.

Let’s look at some examples:

Git enables easily creating a social space for coordinating work on a code base. It does this by providing affordances such as; committing, diffing, branching and merging, to assist in that coordination. The affordance of branching is itself an example of Collaborative Power. Within the social space of a code repository, a branch also creates a secondary, simple and secure, social space for further collaboration, or a sub-space. It’s a semantically separate and differentiated place for a sub-group (perhaps of one) to work on the code. This was Git’s “Killer Feature”, branching made trivially cheap.

Tools like Discord, Slack and Mattermost make it trivially easy to create the high-level social space of a “Team” or “Server”, and within that, semantically tagged sub-spaces of chat channels. This is analogous to the Repo and Branch levels of VCS systems but for messaging.  The ease and low cost of creating social spaces at both of these levels, and the affordances in those spaces (video/audio chat, screen-sharing, bots, etc) make these tools easy to adopt and continue to use.

Is it possible to generalize tooling for Collaborative Power? In other words, what technical affordances would be necessary for creating generalized sub-spaces within a high-level social context?

Imagine being able to create a social space for collaborative work-groups, where what is made trivially easy to instantiate and assemble inside the space, is not one single secondary type of sub-space (i.e. a branch as in a VCS, or a channel in a messaging system) but the mini-apps of your choice, within a simple composible frame.

We is a new Holochain app we’re building over at Lightningrod Labs that provides this heightened Collaborative Power. We makes it trivially easy for users to create high-level social spaces and add “applets” to them. These applets provide the functionality for the exact types of collaboration intended by the group.

The UI looks a little like Slack or Discord. There’s a left-hand bar showing your “we-groups”, but instead of the right hand being the channel text stream, there is a secondary bar of “Applets” that have been instantiated into that social space, with the main right-hand window space displaying the UI of one or more of those applets.  Here’s a screenshot showing a social space with the Notebooks applet active, which provides a real-time collaborative markdown-editing: 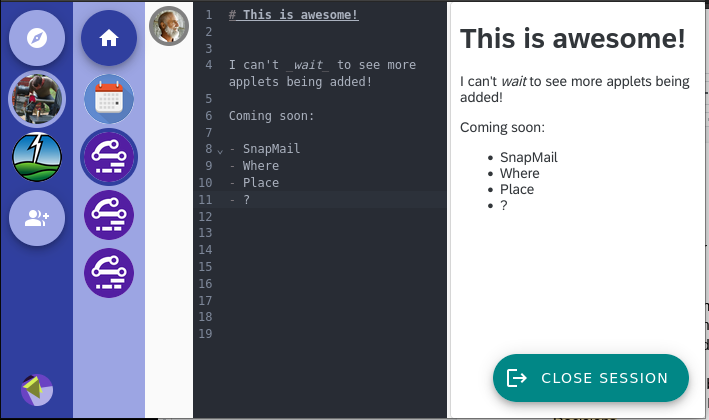 The power of We comes from how easy it is from both a user’s and a developer’s perspective to add new collaboration affordances.  End users simply pick them directly in the Applet Library: 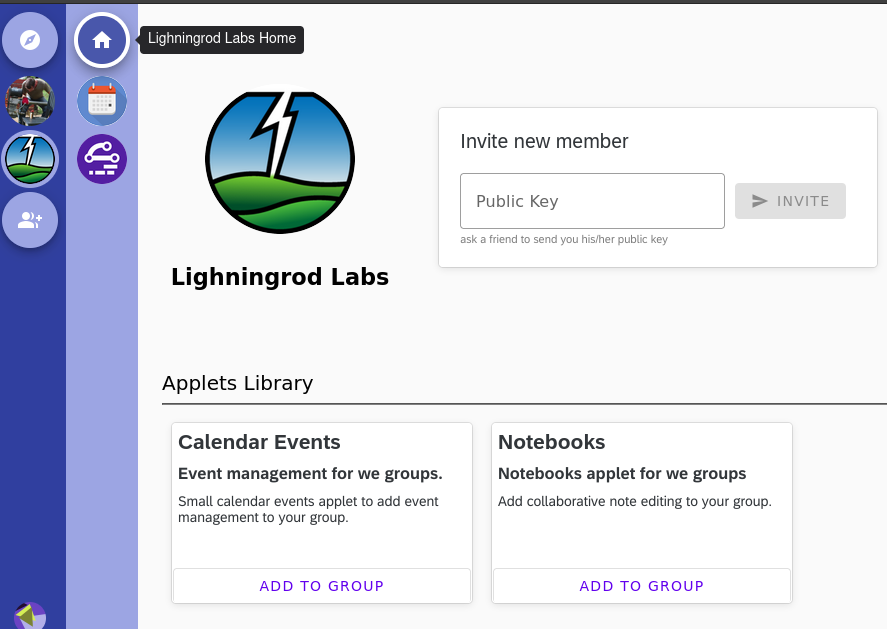 For Holochain hApp developers, this addition makes it very simple to compile, build, and publish to the DevHub their existing hApps as “we-applets”.  Then any such hApps become instantly available for composing into We social spaces.

In a way, We might “just” look like another attempt at a groupware tool, but there are few things things that set it apart:

Where “We” is going…

The initial release of We demonstrates the key Collaborative Power functionality of adding new applets into social spaces on-the-fly. The next steps come from adding compositional grammatics to applets. These grammatics exist at a few levels:

Subsequent releases of We will focus on adding in all these grammatical elements, listed above.

So, back to the claims of Collaborative Power:

Collaboration effectiveness improves in direct proportion to both how easy it is to create nested social spaces in which to do that coordination, and the power of the affordances in those spaces to be recomposed overtime

We provides a significant upgrade to the ease of assembling affordances in social spaces.  And it does so while upholding the significant properties of Generality, Decentralization, Agent-Centricity along with providing explicit grammatics for visual assembly, templating and evolution of social spaces.

We hope to see you in We!

P.S: For the technically inclined, hop on over to our github repo and check out the instructions on how to convert your regular hApp to be We ready!

2 thoughts on “We: Social Spaces for Collaboration”